No Buffalo Bills player will ever wear No. 78 again.

While there are 30 members of the Bills Wave of Fame, only one other number has been retired in team history: Jim Kelly’s No. 12.

Kelly had his number retired in 2001. Smith will become the second, when his No. 78 is retired on Thursday night, Sept. 15, against the New York Jets jerseys.

The No. 1 overall pick in 1985, Smith enjoyed 19 NFL seasons, including 15 in Buffalo. The best defensive player in Bills history own the NFL’s all-time sack record, with 200 quarterback takedowns — 163 came in Buffalo.

Smith was the face of the defense during the Bills’ run to four straight Super Bowls jerseys in the early 90s. Smith was named NFL Defensive Player of the Year twice (1990, 1996), garnered 11 Pro Bowls and was named First Team All-Pro eight times in his career. The pass rusher was inducted into the Pro Football Hall of Fame in 2009.

NFL Media Insider Ian Rapoport reported that the Bills are expected to franchise Glenn if they can’t work out a long-term deal by March 1 franchise tag deadline.

Glenn, 26, was drafted 41st overall by the Bills in 2012. He has played and started in 61 games for the Bills, including every game over the past three seasons. He is considered one of the top impending free agents this offseason — Around The NFL ranked him No. 8 in its top 99 free agents.

Glenn seems to be a priority for the Bills as the team is pressed against the salary cap. As Around The NFL’s Conor Orr pointed out earlier this week, the Bills are one of five teams expected to have less than $10 million available before cuts, along with the Colts, Saints, Dolphins and Cowboys.

Three days after releasing pass rusher Mario Williams, the Bills are waving goodbye to a longtime member of the secondary.

The Bills released cornerback Leodis McKelvin jersey, the team announced Friday. The move will save the Bills $3.9 million and bring the team roughly $13 million under the cap, per ESPN’s Mike Rodak.

McKelvin makes for an interesting addition to the free-agency pool. The selection of available cornerbacks is shallow, meaning the 30-year-old defender is bound to draw interest.

McKelvin, 30, suffered through an injury-ravaged season, playing nine games after spending half the year on the team’s non-football injury list with an ankle injury he suffered in 2014. 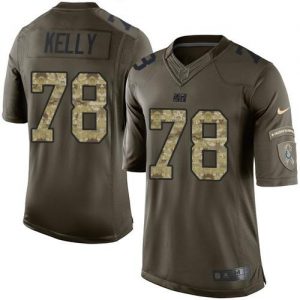 As the 11th overall pick of the 2008 draft, McKelvin started 60 games over eight seasons in Buffalo, with some of his finest work coming in 2013.

The Bills and Seahawks played one of the best games of the season in Seattle’s 31-25 victory Monday. But much of the talk after the game was about the confusing, regrettable end to the first half.

A missed unnecessary roughness penalty coupled by the referees failing to reset the play clock on a successful field-goal attempt played a role in the Bills’ loss.

Dean Blandino, NFL senior vice president of officiating, said on NFL Total Access Endgame after the game that the referees made two mistakes in the bizarre sequence just before halftime.

“It should have been unnecessary roughness,” Blandino said about Seahawks cornerback Richard Sherman’s hit on Bills kicker Dan Carpenter on a 53-yard field goal attempt. Sherman only was deemed offsides on the play.

“The referee didn’t think that the contact was severe enough, he felt that players were coming together and he just didn’t think it was a foul,” Blandino said. “We looked at it, it is a foul.”

On the ensuing field-goal attempt, the referees flagged the Bills for delay of game even though an official was over the ball with less than 10 seconds remaining on the game clock. Blandino said referees need to reset the game clock if they’re handling the ball with fewer than 20 seconds left on it.

After the game, Ryan relayed an exchange he had with Sherman following a third quarter interception.

“He’s mean-mugging like he’s always doing and whatever,” Ryan said. “It was a ridiculous play, no question. Then he’s over on the sideline basically taunting us, so I had some words. I think I said ‘You’re too good a player to act like an ass.’ “